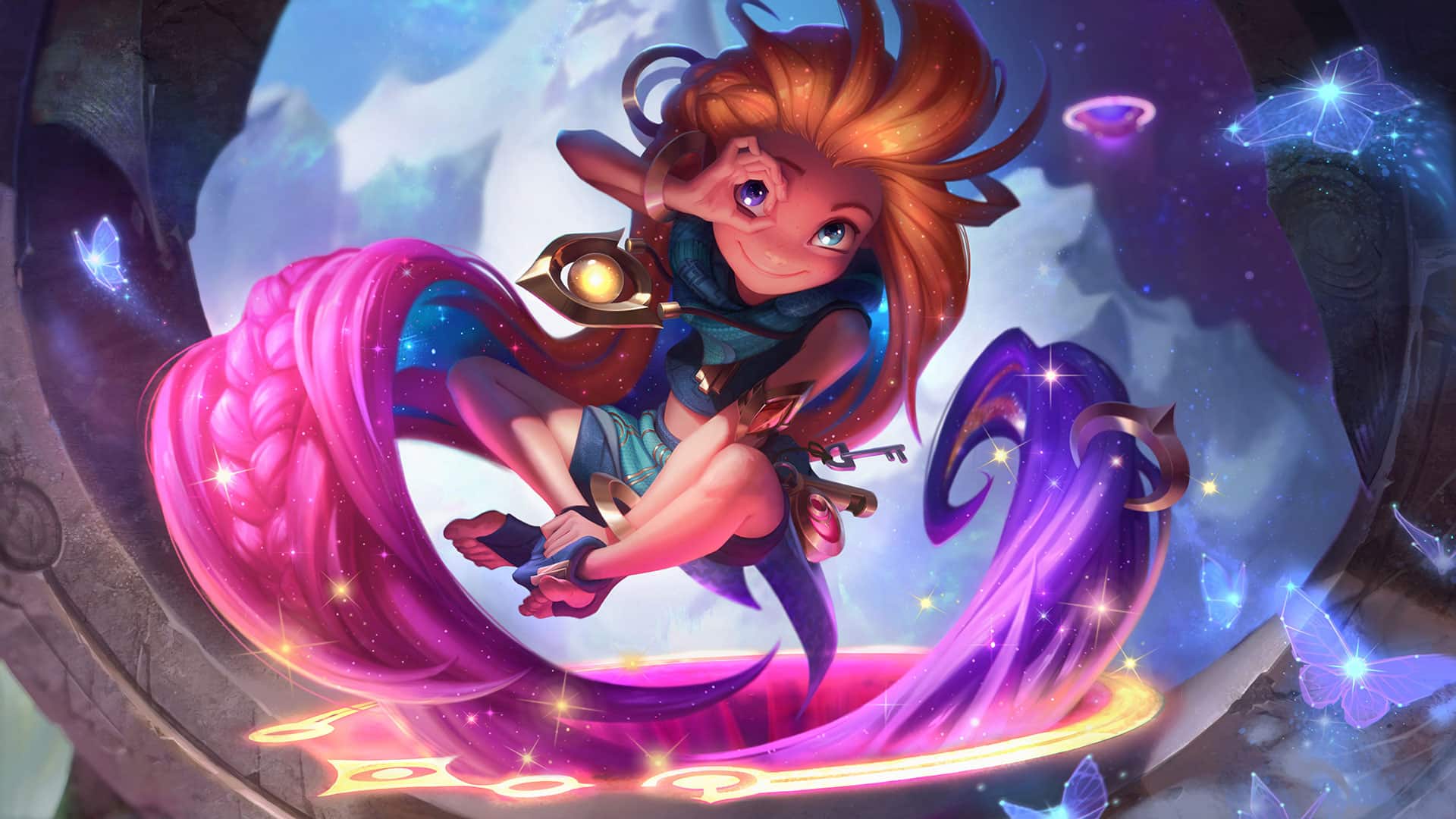 Besides starting Ranked Season 8, Wild Rift’s first patch of the year welcomes Zoe and Zeri to the Rift with a new Wild Pass. A New game mode called ARURF (All Random Ultra Rapid Fire) and a Lunar New Year themed event allows fans to win a plethora of colorful cosmetics and skins. Along with multiple quality-of-life changes, Riot Games have also introduced a series of updates that intend to improve player experience in the later stages of a game.

1 – Paddle Star: Zoe fires a star away from enemy. Recasting the ability directs the star toward the enemy. The more the travel distance, the more the star will deal damage.

3 – Sleepy Trouble Bubble: Zoe fires a bubble within a marked radius that is capable of putting the enemy to sleep for a short amount of time. Sleeping enemies take double the amount of damage. Casting the bubble over walls increases the range.

Portal Jump (Ultimate): Zoe’s ultimate allows her to teleport to a short distance within the map. The player can cast abilities and attack while teleporting.

Riot starts off the update by introducing changes that allow inhibitors to respawn. When the inner turret is destroyed, an inhibitor will respawn after a certain amount of time at the place where the inner turret was destroyed. Inhibitors cannot attack, and when there is an inhibitor present, enemy super minions cannot spawn in that lane. Destroyed inhibitors will also respawn after a certain amount of time. This addition should help the game still feel winnable even if you lose an inner turret early, and will give you and your teammates a chance to focus more on facing off against the enemy team and less on their minions flooding into your base.

Once you reach 22 minutes in game, your outermost turret in each lane will start to burn and lose 25 magic resistance and 25 armor. Then they continue to burn and start to lose 3% max health every 3 seconds. However, you and your team will still need to group up and end the game together or with your minions as the turrets and inhibitors in the opposing team’s base will no longer take burn damage once their health drops below 25%. The dev team wants the players to feel the urgency of pushing their advantage or try to make a comeback through team fights rather than just waiting to try and farm up.

The first patch of 2023 includes a plethora of tank updates to make tanky champions “feel” more impactful. The current changes intend to improve the gisibility of tanks in games across all ranks while increasing the amount of utility the current tank items provide. With a new item called Dawnshroud along with updates to existing items such as Randuin’s Omen and Frozen Heart, Riot wishes to fulfill their goal of making tanks more powerful.

Dawnshroud
Dawnshroud is a new tank item that’ll help aggresibe tank support champs looking to get ahead through laning. When you immobilize a champion, Dawnshroud’s passive will damage and reveal nearby enemy champions.

Randuin’s Omen
Randuin’s Omen receives a new passive. Once you’re hit by a critical strike, you’ll gain stacks of Determination for 5 seconds. Once you attack a champion, you’ll be able to consume your Determination stacks and heal for the amount consumed. This change will mean that you’ll need to attack to make full use of your damage reduction instead of passively gaining it, which will reward you even more for good decision making.

Frozen Heart
Basic attacks and magic damage dealt and inflicted on the player and nearby allies will now apply a stack of Chill to enemy champions. Stacks of Chill will slow enemy attack speed, up to a cap. This stacking debuff intends to make Frozen Heart more impactful overall. Spirit Visage is also slated to receive multiple balance improvements.

Riot starts off the new yewr by introducing a plethora of changes to the competitive mode allowing players to compare their role scores with each other. Player will also be able to see the top players for each role in their region — the top player will be rewarded with a special title. However, all role scores will be reset at the start of the new ranked season. But this doesn’t mean your previous performance would go all to waste, as Riot will offer a boost based on  your previous placement role scores. Besides introducing a new layout for the Ranked Mode Select, Riot’s Wild Rift team will also be making several changes to the Ranked Reward Tracker. Also, Loadouts will reflect popular builds instead of default builds.

The cat’s out the bag and class is in session! Put on your best attire and get your scissors ready so you can cut your way to some stylish victories with the latest attire coming in Patch 4.0!

Releasing in Patch 4.0, The following will be released throughout the patch, with some

When Does Wild Rift Patch 4.0 Release?

Wild Rift’s Risking Spark patch is scheduled to hit live servers across all regions on Thursday, January 12. Slated to filled with a plethora of balance changes and new content, Patch 4.0 will also incorporate multiple ARAM improvements. Fans can click here to view the full patch video breakdown by Riot’s Wild Rift team. We expect more details in the full patch notes article which is slated to be available soon.

For more news about League’s mobile port, follow us here on ESTNN.