Lookers has raised its 2022 full-year profit expectations to over £80 million and revealed plans to add further to recent new car franchise additions Lotus Cars and Ora.

In a trading update published via the London Stock Exchange this morning the AM100 PLC’s chief executive Mark Raban revealed that improvements in its year-on-year performance during Q4 had prompted the business to “increase our full year profit expectations”.

Underlying profit before tax is now expected to be over £80m – up from ‘not less than £75m” – when Lookers reveals its preliminary annual financial results on April 5, compared to a £90.1m 2021 total which included £9.8m of COVID-19 support from the UK Government. 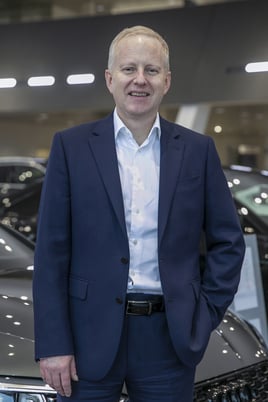 Current AM Awards business leader of the year Raban said the group’s 2022 success had been achieved “against a context of significant supply chain disruption and unprecedented inflationary cost pressure”, adding: “Despite a number of ongoing trading headwinds, we have started 2023 confidently.

“Our strong OEM relationships, clear strategic priorities, financial capacity and above all the commitment of my Lookers colleagues leaves us very well positioned for the future.”

Today’s trading update said Lookers had outperformed the market by approximately 3.1% in Q4 as it benefitted from a strong focus on operational optimisation and an omni-channel customer experience.

Aftersales revenues grew by around 7.5% on Q4 2021, meanwhile, with profit margins maintained on that prior period.

As well as maintain a strong balance sheet with net cash of over £70m at December 31 (December 2021: £3m) and a property book value of over £297m as at 30 September 2022, Lookers is also continuing to implement its share buyback programme.

The programme, which started in October last year, had purchased 5.7m shares at a cost of £4.5m (equivalent to an average price of 78p per share) by the end of 2022.

MG Motor UK will be added at the group’s existing site in Worcester while another “leading global Chinese EV manufacturer” will also be added to existing locations in the North East, South Yorkshire and Northern Ireland on its entry into the UK market.

Among the new OEM brands expected to enter the UK in 2023 are BYD and NIO.

Giving its outlook for the year ahead, Lookers said that its board had been encouraged by the strength of trading in Q4 and the magnitude of our new car retail and fleet order banks entering into 2023 but added: “We are also conscious of the potential impact on consumer spending by external factors such as high inflation and interest rates.

“We begin the new financial year with confidence in the resilience of our business model and ‘omni-channel’ customer offering, and as such the board’s expectations for 2023 remain unchanged.”