Battle Pass 2022 – How to Play Anti-Mage in Diretide

Here’s how you can improve your Diretide games while playing as Anti-Mage with the Battle Pass 2022.

Diretide is a seasonal game mode that was recently introduced to Dota 2. Players can take part in Diretide matches during Part II of the Battle Pass 2022 that is being held between November 3, 2022 – January 12, 2023.

Players can attack Greevils on the map to collect Taffy in Diretide matches with the Battle Pass 2022. You can defend your wells from being attacked by Roshan by preventing the enemy team from scoring Taffy in the wells. Each team has 4 wells that have to be protected. Roshan will walk around the Diretide map to attack the well with the most Taffy in it. The first team to lose all 4 of their wells will lose the game.

There are quite a few heroes who can help you win more Diretide games. Many people choose Anti-Mage to drain the mana of their enemies in battle. The increased gold per minute (GPM) also helps beginners build core items faster for the Agility hero in Diretide matches. You can use Anti-Mage to teleport between the Greevil camps, neutral creep camps, and enemy wells to score more Taffy in less time.

How to Play Anti-Mage in Diretide 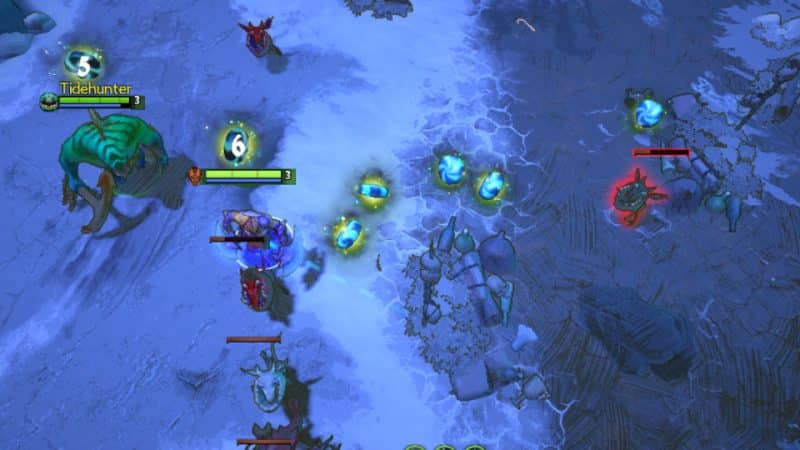 Anti-Mage is a major carry hero in Dota 2. People can play as Anti-Mage to burn the mana of their enemies in battles. The Agility hero can use his quick hands to cut through his opponents with ease. He can counter magical spells from enemy heroes to gain an advantage during team fights in Diretide matches.

The melee hero has a base HP of 620 and a base mana of 219. Anti-Mage has base stats of 24 Agility, 21 Strength, and 12 Intelligence. He gains 2.8 Agility per level. Anti-Mage has a base attack damage of 53 – 57, that lets him destroy Greevils with a few simple attacks.

Wraith Band is an item that you can purchase for Anti-Mage right after spawning into the game. The item costs 505 gold and provides 6 attack speed, 5 Agility, 2 Strength, 2 Intelligence, and 2 armor to the melee hero.

You can take at least one level of Blink at the start of the game. Blink will let Anti-Mage teleport up to 750 distance in any direction. Anti-Mage can use Blink to escape from team fights and attacks from Roshan in Diretide games. You can level up Blink to increase the maximum range to 1200 distance. It has a cooldown of 6 seconds and consumes 45 mana in the game.

Each hit from Anti-Mage can burn the mana of his enemies by leveling up Mana Break. The passive ability, Mana Break, can be used to burn 28 mana per hit at level one. You can max out Mana Break to burn up to 64 mana with every physical attack.

Enemy units affected by Mana Break will have their movement slowed by 40% for 0.8 seconds. Mana Break also deals 50% of the mana burned as damage to Anti-Mage’s opponents in the game. You can increase the mana burn per hit by reaching level 15 with Anti-Mage.

You can use Counterspell to reflect any magical spells back to the enemy hero who cast it. Counterspell has a duration of 1.2 seconds and increases the magic resistance of Anti-Mage by 45%. It has a cooldown of 3 seconds and requires 45 mana to be used in Diretide matches.

Mana Void, Anti-Mage’s ulti, can be used to deal massive amounts of damage to enemy heroes. You can use Mana Void on enemy heroes after you have depleted their mana pool. Enemy units affected by Mana Void can take up to 1.1 damage for every missing mana point.

You can cast Mana Void to stun enemies for 0.3 seconds, allowing Anti-Mage to interrupt enemy heroes while they deposit Taffy in your wells. Mana Void affects all enemy units in a 500 radius. It has a cooldown of 70 seconds and needs 300 mana. You can reduce the cooldown of Mana Void by 50 seconds at level 25 through the Talent Tree.

Items to Buy For Anti-Mage in Diretide 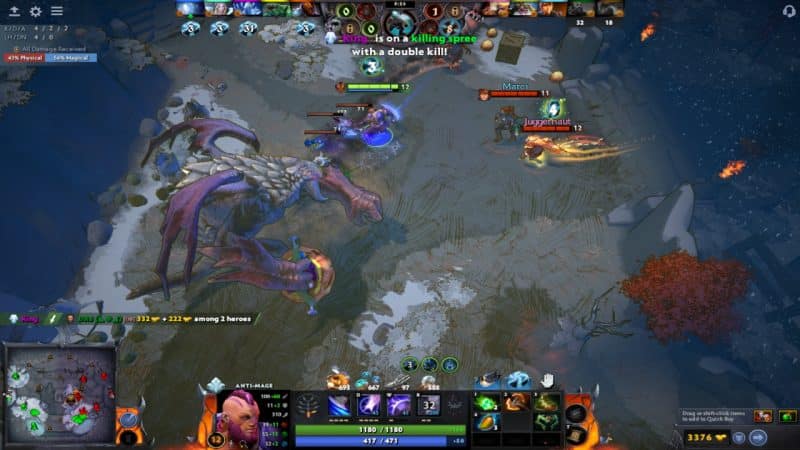 You can purchase Battle Fury to help Anti-Mage farm gold faster during Diretide games. Battle Fury can cost players 4100 gold in the game. It provides 60 attack damage, 7.5 health regeneration, and 2.75 mana regeneration. Battle Fury grants the passive ability, Cleave, that lets melee heroes like Anti-Mage deal up to 70% of their attack damage to all enemy units in front of them in a 650 radius. 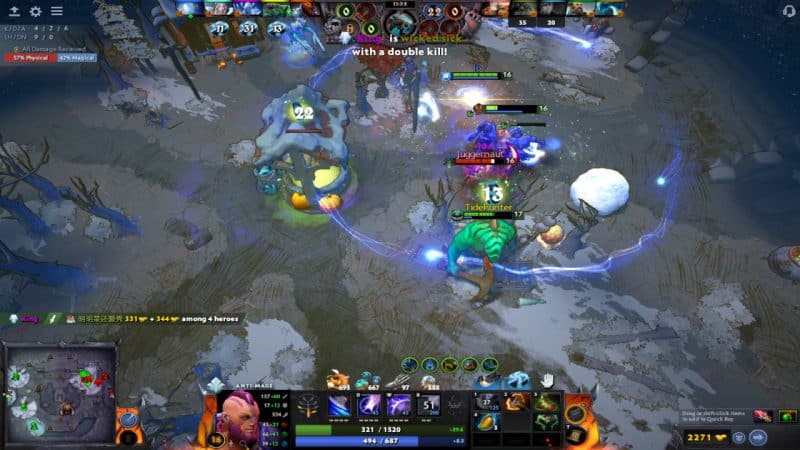 Manta Style is an integral item for Anti-Mage. The item provides 26 Agility, 12 attack speed, 10 Strength, 10 Intelligence, and 8% movement speed to the melee hero. Anti-Mage can use Manta Style to summon up to 2 mirror images of himself in battles.

The illusions created by Manta Style deal 33% of the attack damage of Anti-Mage and take 300% damage from incoming attacks. The mirror images conjured by Manta Style last for up to 20 seconds. Manta Style has a cooldown of 30 seconds and consumes 125 mana in the game.

Butterfly is a core item for Agility heroes in Dota 2. Anti-Mage will gain 35 Agility, 35% evasion, 30 attack speed, and 25 attack damage by purchasing Butterfly in Diretide matches. Butterfly can cost 4975 gold in the game. You can use the increased attack speed provided by Butterfly to drain the mana of your enemies within seconds before using Mana Void to deal the final blow.

Satanic can be bought for 5050 gold in the game. Anti-Mage gains 38 attack damage and 25 Strength by equipping Satanic. Melee attacks from Anti-Mage restore up to 30% of his attack damage as health by providing Lifesteal.

You can use Satanic to activate Unholy Rage while playing Anti-Mage in Diretide mode. Unholy Rage increases the Lifesteal by 145% for 6 seconds. Satanic has a cooldown of 30 seconds. The item can help Anti-Mage survive team fights without losing a large portion of his health.

Best Allies for Anti-Mage in Diretide

Battery Assault can be activated to deal up to 95 damage per second (DPS) for up to 10.5 seconds. Enemy units hit by Battery Assault will be stunned for 0.7 seconds per attack. Anti-Mage can attack enemy heroes while they are taking damage and being stunned by Clockwerk.

Clockwerk’s ulti, Hookshot, can be used to launch a projectile at enemy heroes from 3000 distance away. The increased cast range of Hookshot enables Clockwerk to stun enemies for 2 seconds, giving Anti-Mage adequate time to close in on the battle in Diretide mode. Hookshot has a cooldown of 30 seconds and consumes 150 mana.

Dark Willow is an Intelligence hero who can root enemies in team fights. Anti-Mage can combine his attack speed with the magical spells of Dark Willow to dominate Diretide matches. Dark Willow can use Bramble Maze to root multiple enemies for up to 2.5 seconds. Bramble Maze has a radius of 500, making it convenient to cast Mana Void while enemy heroes are rooted to obliterate the enemy team.

Ember Spirit is a carry hero who can help Anti-Mage get more kills in Diretide games. Ember Spirit can use Searing Chains to hold enemy heroes in place for up to 3 seconds. Enemy units take up to 110 DPS, making it easy to smash opponents while playing Anti-Mage in the new seasonal game mode.

Ember Spirit can nuke Greevils on the Diretide map using Sleight of Fist to collect more Taffy. Sleight of Fist can be used to hit all enemies in a 550 radius and deals 150 bonus damage, making it handy against Greevils in Diretide,